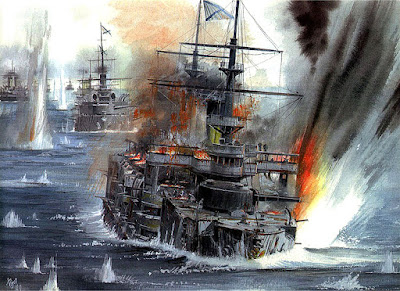 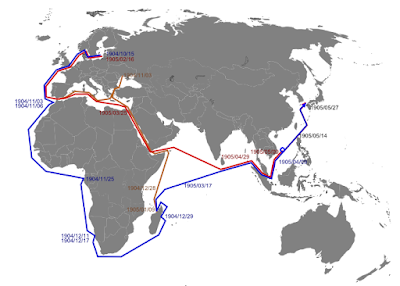 Voyage of the various units of the Baltic Fleet, known collectively as the Second Pacific Squadron and the Third Pacific Squadron, from the Baltic Sea to the Tsushima Straits during the Russo-Japanese War. This almost eight-month voyage, from 11 October 1904 to 27 May 1905, is considered one of the epics of naval history. The decision to dispatch the Baltic fleet to East Asia was made in June 1904 when the vulnerability of the Pacific Fleet stationed mainly in Port Arthur became evident, especially as the Japanese Third Army began to close in on the fortress. The decision was followed by the appointment of Vice Admiral Zinovii Rozhestvenskii, the chief of the naval general staff, as commanding officer of the force. He was assisted by Rear Admiral Dmitrii von Felkerzam, who was to command the 2nd Battleship Division, and Rear Admiral Oskar Enkvist, who was to command the 1st Cruiser Division. After lengthy preparations the assembled fleet, now called the Second Pacific Squadron, left its base at Kronstadt on 30 August and began maneuvers in the Baltic Sea. During the following six weeks, Tsar Nicholas II vacillated over whether to dispatch the fleet; his indecisiveness peaked during October when he changed his mind three times. Finally, on 10 October 1904, he reviewed the armada at the port of Reval [present-day Tallinn, Estonia]. The next day the force of 42 warships and 12,000 officers and sailors left for Libau [Libava, present-day Liepaja in Latvia], and after coaling it departed on 15 October for a voyage of 33,000 kilometers [18,000 nautical miles] to an unknown destiny.

Rozhestvenskii's critical hurdle was logistic. He needed at least 3,000 tons of coal a day without entering neutral ports, closed to his armada by international law. Moreover, the majority of the principal coaling stations en route to Asia were in the hands of Great Britain, Japan's major ally. Russia turned instead to its allies, France and Germany. Although the two powers were reluctant to intervene, a German company, the Hamburg-America Line, leased the Russians scores of colliers for the transport of coal; for its part, the French government allowed the fleet to anchor briefly at a number of ports in its colonies. Before the fleet crossed the straits into the North Sea, tension rose due to nonsensical rumors of an impending Japanese ambush by torpedo boats. When the fleet reached Dogger Bank during the night of 21-22 October 1904, it encountered some vessels that it identified as enemy torpedo boats. The Russians opened fire and even hit each other. In the morning the enemy turned out to be a British fishing boat, and apart from the sheer embarrassment the matter nearly developed into a serious international conflict with Great Britain. Only the patience and determination of British Prime Minister Arthur Balfour and Foreign Minister Henry Lansdowne could calm the public cry for revenge, and the Dogger Bank Incident was eventually resolved at the International Court at the Hague.

The ships reached the Spanish port of Vigo on 1 November 1904, and after negotiations they were granted their first refueling. At the next stop in Tangier the armada split up. Five of the older and least reliable warships, the battleships Sissoi Velikii and Navarin, and the cruisers Svietlana, Zhemchug, and Almaz, along with several transports, took the shorter route through the Suez Canal under the command of Felkerzam, while the larger and newer vessels steamed southward to round Africa. On 20 November the first of two detachments intended to reinforce the Second Pacific Squadron left Libau under the command of Captain Leonid Dobrotvoskii, to join Rozhestvenskii's armada. The detachment took the short route via the Suez Canal. It comprised 10 ships, led by the two new cruisers Oleg and Izumrud.

The main force headed undisturbed to Dakar and refueled there on 16 November, and then reached Gabon on 1 December, Great Fish Bay six days later, and Angra Pequena in German South West Africa on 16 December. The next day they departed for the long sail to Madagascar. On their way, after rounding the Cape of Good Hope, they received the grim news of the fall of Port Arthur. The loss of the main Russian naval base in East Asia and the destruction of the First Pacific Squadron left Rozhestvenskii with an impossible dilemma. He could not return, but with no bases from which to operate, his force was obviously inferior to the Japanese Combined Fleet. The Russian naval base at Vladivostok could not serve as a substitute since it lacked naval facilities and supplies. Morale among the crews diminished further, while Rozhestvenskii shut himself away, exasperated at the intention to send the Third Pacific Squadron under the command of Rear Admiral Nikolai Nebogatov, which he felt would be futile in the ensuing engagement with the Japanese. Rozhestvenskii met Felkerzam's detachment at Nossi Bé in northern Madagascar on 9 January 1905, and on 14 February he was also joined by the small detachment of Dobrotvoskii. Aday later the Third Pacific Squadron left Libau, just as the distressing reports from the battle of Mukden arrived.

Although he was instructed unequivocally to wait for Nebogatov's squadron, Rozhestvenskii left Madagascar on 16 March and proceeded to Singapore, passing there before thousands of onlookers on 8 April 1905. Unable to coal or even anchor in British ports, the Second Pacific Squadron refueled at sea and proceeded northward. On 14 April it anchored in Cam Ranh Bay, off the coast of Annam in French Indochina (today Vietnam). In this last stop before battle, Rozhestvenskii was ordered to wait for the arrival of Nebogatov, who meanwhile had passed through the Suez Canal, coaled in Djibouti, and proceeded to the Straits of Malacca in a search of ships of the Second Pacific Squadron. During the long stay at this last stop before battle, morale had never been so low and mutiny broke out on the Orel. The lengthy anticipation of the arrival of Nebogatov's ships led to a storm of anti-French demonstrations in Japan and mounting diplomatic pressure on Paris. France indeed wanted the Russian armada to leave but had little power to persuade it to do so. Finally, on 9 May 1905 the Third Pacific Squadron joined the main armada; now the joint force, which had grown to 52 vessels, was ready to leave. This was no secret since the voyage received constant coverage by the international press. Furthermore, using an intricate net of military intelligence, the Imperial Japanese Navy followed closely the advance of the Russian armada, although it did not know the Russians' exact course to Vladivostok. Admiral Togo Heihachiro, commander of the Combined Fleet, assumed that Rozhestvenskii would pass through the Tsushima Straits. Accordingly he sent a multitude of warships and fishing boats to locate the Russians as they approached the straits.

Hidden by low visibility, Rozhestvenskii chose indeed to traverse the Tsushima Straits en route to Vladivostok. He divided his warships into two columns. In the eastern column, which was nearer to the island of Tsushima, were all seven principal battleships of the fleet, as well as a cruiser. The secondary column, sailing a parallel course, included all the other vessels, led by the outdated battleships under the command of Nebogatov. The death of Felkerzam three days before the passage through the Tsushima Straits left Nebogatov second in command, although he was not informed of this. On 26 May 1905, the Japanese armed merchant cruiser Shinano sighted the Russian armada and called for additional forces by radio. The following morning, Japanese warships tailed their opponents like a distant shadow, and their number increased continually toward noon. Soon afterward, the decisive battle of Tsushima began to unfold.

BALTIC FLEET.
One of the three fleets of the Imperial Russian Navy at the outbreak of the Russo-Japanese War. Being far from the naval arena at the outbreak of the war, the majority of the warships of the fleet were dispatched to assist the besieged Pacific Fleet and were eventually sunk or captured at the battle of Tsushima. The origins of the Baltic Fleet date to the early 18th century, when Peter the Great established his new capital on the Baltic at the end of the war with Sweden and began to establish Russia as a naval power. While the fleet had been the backbone of the Imperial Russian Navy ever since, it remained heavily dependent upon foreign commanding officers throughout the 18th century. After the death of Tsarina Catherine, and especially during the reign of Tsar Alexander I (1801-1825), the Fleet was weakened, although it played a limited part during the Napoleonic Wars in denying the French armies a supply route for their troops. Following the Crimean War in 1854, Russian warships were forbidden to sail into the Black Sea, and Kronstadt, the main base of the Baltic Fleet, assumed its earlier predominance.

In the latter half of the 19th century, the fleet expanded to become the third largest in the world and comprised many new and modern warships purchased or constructed with huge budgets. At the same time, slight emphasis was placed on training crews, which left them far behind European fleets of similar size. Crews remained ineffective due to limited training and social disaffection while their ships lay idle in port for many months of the year. During the Russo-Japanese War the fleet was divided into two squadrons, known as the Second Pacific Squadron and the Third Pacific Squadron, which were sent to East Asia under the command of Vice Admiral Zinovii Rozhestvenskii. The long voyage of the Baltic Fleet ended upon arrival at the Tsushima Straits, where it was virtually destroyed in the battle of Tsushima. The fleet also suffered from social unrest, and later in the same year its main base was afflicted by a mutiny known as the Kronstadt Rebellion.

The rebuilding of the fleet began only in 1909 with the laying down of four new battleships. Despite some ambitious construction programs in the next years, only the four ships whose construction began in 1909 and one new destroyer were ready in time for World War I. The naval war in the Baltic from 1914 to 1917 was fought mainly by small boats and was distinguished above all in mine laying. The fleet played little role in the civil war as a naval contingent, but four years later, dissatisfied with the Soviet regime, the sailors of Kronstadt mutinied again and were suppressed harshly. In the 1920s the fleet was reduced to a small coastal defense force, but in the next decade it began to benefit from larger budgets. In World War II the fleet delayed the German invasion to Russia, but for the remainder of the war its ships were bottled up between Kronstadt and Leningrad [St. Petersburg], although it assisted somewhat in the defense of Leningrad. After the war the fleet regained its old bases and acquired new, ice-free bases in former East Prussia. It resumed the construction of a large blue-water fleet, and by the time of the collapse of the Soviet Union in 1989 it had been built into a large and modern fleet with the emphasis on nuclear submarines.
Posted by Mitch Williamson at 2:23 AM